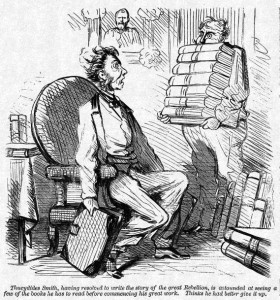 The historical record of the American Civil War includes a vast amount of visual material—photographs, illustrated news periodicals, comic publications, individually-published prints, almanacs, political cartoons, illustrated envelopes, trade cards, greeting cards, sheet music covers, money, and more. The era’s visual media heralded an unprecedented change in the production and availability of pictorial media in everyday life and an innovation in the documentation of warfare. In the last decade, a remarkable amount of these materials, previously confined to libraries, historical societies, and museums, has become available on the Web, and in the last generation drawn the attention of humanities scholars.

In July 2012 the American Social History Project held a National Endowment for the Humanities Summer Institute on The Visual Culture of the Civil War. For two weeks, thirty college and university teachers from across the United States explored the array of visual media that recorded and disseminated information about the war and the ways these old and new forms of visual representation and communication shaped Americans’ understanding on both sides of the conflict. This website features presentations by historians, art historians, and archivists who discussed their research with institute participants. Each presentation is accompanied by a gallery of archival images; a set of primary documents that illuminates aspects of the subject; and a bibliography of books, articles, and online resources for further investigation.