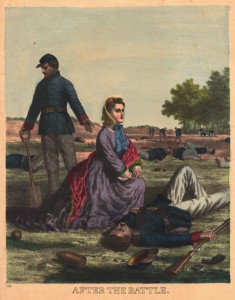 By the middle of the nineteenth century Americans could turn to a vast array of commercial visual media to learn about the tumultuous policies, events, and disputes that would lead to the Civil War. Many of these media were new—inexpensive photographic prints, the popular stereograph viewer, and the weekly pictorial newspapers were all introduced during the 1850s. Once the conflict began, the production of pictorial information and entertainment, especially in the industrialized North, soared to meet the interests and passions aroused by war.

Some of the most popular and influential visual media of the war were discussed in the institute, including photography, the illustrated press, political cartoons, and individually-published prints. The institute also addressed the rise of public sculpture, which after the war became the focus of a new struggle over its meaning and memory.